For security reasons, your session has been timed out. To continue, Please login.

The government has hiked interest rates of various small savings schemes for the third quarter (October 1 to December 31) by up to 40 bps. These schemes include the Public Provident Fund (PPF), Sukanya Samriddhi Yojana (SSY), National Savings Certificate (NSC), and post office time deposits.

This is a welcome relief for fixed income investors as rates have remained unchanged for the previous two quarters.

Added to that, the government had reduced the interest rates on these schemes in January -March 2018, quarter.

According to a circular issued by the Finance Ministry on September 19, the interest rates of various small saving schemes have been hiked by between 30 basis points and 40 basis points. (One percentage point is equivalent to 100 basis points.)

The one year, two-year and three-year time deposit interest rates have been hiked by 30 basis points. Rates for other schemes such as the five-year time deposit, Sukanya Samriddhi Scheme and PPF have been increased by 40 basis points. After the hike, PPF and NSC will earn 8 percent, the Sukanya Samriddhi Scheme will fetch 8.5 percent, and the Senior Citizens’ Savings Scheme will get you 8.7 percent.

The interest rate on Kisan Vikas Patra or KVP has been hiked to 7.7% from 7.3%. This means that KVP will now mature or double in 112 months as compared to 118 months earlier.

The 5-year National Savings Certificate or NSC will now fetch 8%, the same rate as that of PPF, from 7.6% currently.

The interest rate on popular 5-year Senior Citizen Savings Scheme has been hiked to 8.7% from 8.3%.

Similarly, the interest rate on post office Monthly Income Scheme or MIS has been hiked to 7.7% from 7.3%.

The post office savings deposit interest rate has been kept unchanged at 4%. 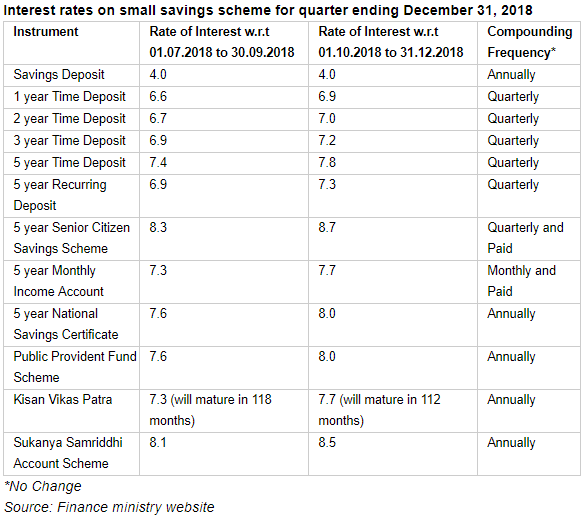 
The RBI had raised interest rate in August for the second straight meeting, but retained its “neutral” stance as it aimed to contain inflation while not choking growth. With the interest rate on small savings scheme going up sharply, banks would be under pressure to increase deposit rate.

However, interest rate on the post office savings account balance has been kept unchanged at 4 per cent.

The committee had suggested that the interest rates of different schemes should be 25 – 100 basis points higher than the yields of the government bonds of similar maturity.

You can apply for an attractive offer with best possible rate of interest and terms for Personal Loan, Business Loan , Home Loan and Car Refinance Loan.